Hello! Apparently I am much slower at getting these recipes to you than I thought I would be, but do not fret…I will get you all the recipes I promised. So here we are with Cappuccino Brownies:

8 ounces good bittersweet chocolate chopped (not unsweetened–I used Ghirardelli chips so I wouldn’t have to chop.)

MAKE THE BROWNIE LAYER: Put rack in middle of oven and preheat oven to 350F. Butter and flour a 13×9 inch baking pan, knocking off excess flour. Melt chocolate with butter and espresso mixture in a medium metal bowl set over a pan of barely simmering water, stirring until smooth. Remove bowl from heat and cool for 10 minutes. (Save the water for the 3rd layer, you will need it again.) Whisk sugar and vanilla into chocolate mixture, then add eggs one at a time, whisking until batter is smooth. Stir in flour and salt until just combined, then stir in walnuts. Spread batter evenly in baking pan. Bake until a wooden pick or skewer inserted in center comes out with some crumbs adhering, 22 to 27 minutes. Cool completely in pan on a rack, at least 2 hours.

MAKE THE CREAM CHEESE LAYER: Beat together cream cheese and butter in a large bowl with an electric mixer on medium speed until light and fluffy. Sift in confectioners’ sugar, then add vanilla and cinnamon and beat until mixture is well combined. Spread cream cheese evenly over cooled brownie layer. Refrigerate until firm, about 1 hour.

MAKE THE GLAZE: Combine all ingredients in a metal bowl set over a saucepan of barely simmering water and heat, stirring, until chocolate and butter are melted and glaze is smooth. Remove from heat and cool to room temperature, stirring occasionally, about 20 minutes. Pour glaze over cream cheese layer, then spread evenly. Refrigerate brownies, covered, until cold, about 3 hours. Cut into 40 bars and remove from pan while still cold. serve chilled or at room temperature.

Wowza…that’s a doozy of a recipe right! Yeah, typing it made me want to take a nap. Anyhow…I have to say–it is SOOOOOO worth it. This is hands down probably the most delicious dessert I have ever had and I could not believe that I made it with my own two hands!

First thing though, please note (as I did not) that this recipe is for 40, yes 40 brownies! That is way more than a normal pan of brownies and although i winged it and just used my 8×8 square pan I should have gone with something a little bigger. Mine ended up really thick, which didn’t bother me…but because they are so rich I can see the point in having them be thinner.

During the brownie layer, adding the eggs one at a time is very important.  I got side tracked while talking on the phone and accidentally added two at one time and it took a lot of extra whisking. Also, another important note I cannot forget is that you need to be extremely cautious with your bowl while melting the chocolate…if you have a metal bowl, please use it! If not, you need to be careful about not getting your water too hot because you will shatter a glass bowl if you do. Also I left out the walnuts. Because of my nut allergy this was a no brainer. But I don’t think you will miss them even if you are a nut person. Can we talk about the espresso powder for a second? Whenever I saw that on the ingredient list, I immediately thought, “Is this a real thing?  This is a cheat/cheap thing right? Isn’t real espresso a must?!” Any who, I was totally won over with the final product and the ease of not needing an espresso machine. Lastly, I obviously was scared about the cooking time with mine being in a smaller pan, but I cooked mine for 27-30 minutes and the edges were not burned and the middle finished cooking in the cooling process. 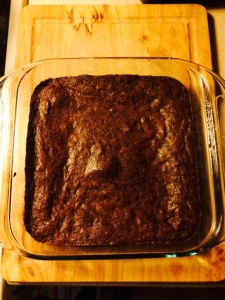 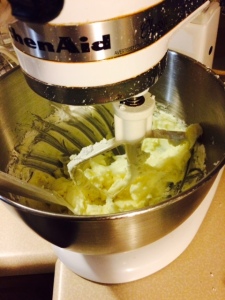 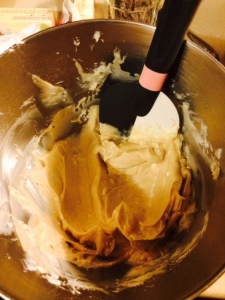 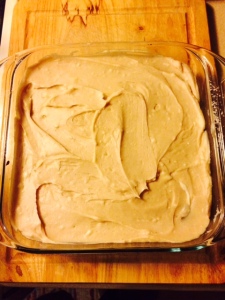 I started doubting the glaze as soon as I realized these suckers were going to be so thick…I knew that the glaze was meant to be the darkest, least sweet and most bitter part of the dessert and I guess it was also probably supposed to be the thinnest layer. So I winged it again, and sort of cut it into 1/3 and made a smaller batch. I was unsure of the consistency though. I don’t know if it was the change of cooler weather but the glaze seemed awfully thick to me. So I did not let it go to room temperature. I just let it cool for a few minutes, drizzled it on, and then smoothed it out. I was afraid of the cream cheese and glaze mixing and so I didn’t smooth it too much. After the glaze, I put it in the freezer for another 5-10. 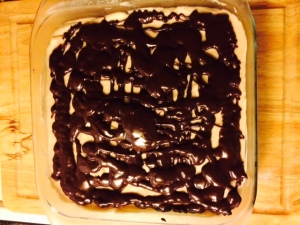 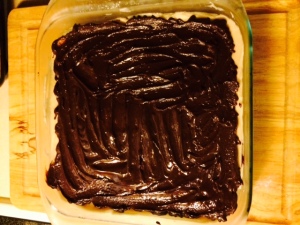 Once it was chilled, I cut a piece–which came out perfect…yes I was shocked. 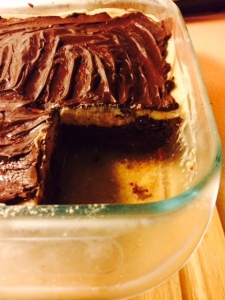 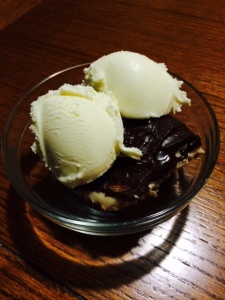 See that massive corner piece I got for myself. That was 90% too big of a piece. I literally was only able to eat 4 bites it was so rich. Gee…I wonder why this recipe calls for 40 brownies?! They are supposed to be thin AND small! I ended up cutting them into small 2 inch size squares and it worked fine too. I hope this will be a recipe you can wow all of your friends and family with at a get together this Holiday season!

Next up, I have already prepared, I just need to get to you…is an Endive, Stilton, Bosch Pear salad. I also have an interesting story to tell you about the Stilton cheese!

One response to “Recipe 2: Food Rut”